#Cyberbullying and #Bullying are not one of the cutest words that have been created in the past several years.  Those two words are hurtful and very rude to say the least.  I don’t think there is one person that doesn’t know someone that has been bullied in some shape or form. One should never take bullying lightly because these are things that kids, who grow into adults, will remember for the rest of their lives.

A recent story in the news in which a GOP staffer bullied the FIRST KIDS, Sasha and Malia Obama,  encouraged me to write this article because more awareness needs to be made an issue that is very serious nature.  It doesn’t matter whether kids are bullying or adults are bullying — it’s just not fare.

Here is an article published by the Huffington Post regarding the GOP Staffer that sent a rude message via social media to the First Kids. I’m unsure what she was thinking, but we are not here to bash her or talk about her.  We are only wanting to express the importance of calling attention to the whole bullying issue and to make everyone aware of it.

Prime example of #cyberbullying – it doesn’t only happen with children. It happens with adults as well.

You can support bullying by donating to this upcoming feature film.  You can donate as little as one dollar and as much as you want.  When you donate at least $30 you will receive a copy of the DVD.  If you are a teacher this will be a great asset to show the students in your classroom.  It’s a fantastic movie for all to see.

Our very own Teen Guest Writer, Wendi Motte, is featured in this upcoming movie too. 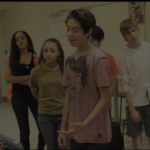