Parents have now taken upon themselves to remain saavy when it comes to technology.  Almost every teen across the country has access to over millions of apps because of the wide usage of cell phones.  It’s imperative and a must that you stay abreast and keep virtual tabs of the apps your teens are using today.

Most parents are very HIP to using Instagram, Twitter, and Facebook; but you are in the KNOW about the other Apps that are being made to entice your teen?

Teens usually try to seek out apps and privacy to be more anonymous.  We aren’t saying they are trying to be deceptive, but they want to have access to things in which their parents are not aware.  In today’s ever so fast growing society it’s almost a part-time job trying to keep up with technology advances.

Do you know which social media sites does your teen uses?

Teens gravitate toward visual apps that provide them with instant gratification and sharing, especially with little or no effort. Some teens are more drawn to these apps because they are making them to where certain things are untraceable.    Why would your teen want things that are untraceable?  Well, just in case they have parents that check their devices they prefer to go with apps that are hidden from the parent.

Facebook and Twitter are just about reaching the Generation X and Baby Boomers stage.  So, teens are more apt to hang out with other teens instead of where Mom, Dad, or their grandparents hangout.  Most teens certainly don’t feel like reading a positive affirmations.   Remember when the hottest going site to be on was myspace?  I do.

We have compiled a list of the TOP 5 Hottest Apps for Teens today:

Most teenagers have a Facebook account.  However, don’t assume they are using this account in the same manner as you have been using your account.    If you aren’t listed on Facebook then you might as well not be listed in the local phone book.  Your teenager is probably a Facebook user, but don’t assume kids use this site the same way you do. Facebook is huge. It’s a default. Not having a Facebook profile would be like not being listed in the phone book back in the olden days. Teens feel the need to maintain a profile there, even if they are not very active on the site. For best results on Facebook, do not engage your teen. Just lurk and collect information.

This photo editing and sharing app is crazy popular with teenage girls who love their selfies. Instagram allows users to edit and post photos taken on their phone, and the images are publicly visible by default. Privacy settings are critical here because there are whole communities dedicated to displaying images of minors in sexually suggestive poses that are not technically pornography. Not to be paranoid, but innocent vacation pictures could end up in a forum for a pedophiles.

On Vine, users create and post videos up to 6-second in length, then they share these video’s on Facebook or Twitter.  As a parent beware and expect inappropriate content.  (This does include sex and drugs). Vine doesn’t require your teen to verify or confirm their age.  So, pretty much anyone can post video’s and it be seen within minutes.  You must do your research to see just how to block inappropriate viewing from your teens.  There are always strangers lurking somewhere to prey on unsuspecting young people.

Kik is a vastly used smartphone messenger app that allow it’s users to send videos, images, and now texting also.  Kik is said to be faster than sending a regular text message.  Think of our current text message on steroids. It’s like lightening speed.  This produces more instant gratification that our society does not need.  Kik also provides Memes that Teens Love.  They can share the meme right over their smartphone.  Download KIK and you might be very surprised to see some of the Not so FUNNY jokes your teen might be sharing.

Snapchat allows its users to send primarily photos and videos that are destroyed at lightening speed, just shortly after they have been received by the recipient.  This Snapchat App is marketed to teens with a “capturing live moments” messaging.  Facebook has connected with this app as well. Facebook allows the Snapchat archives to harvest every post and pic for years to come.  Snapchat’s  “instant gratification” image feature offers your teens the illusion of anonymity, but guess what? Screenshots can be taken and kept by the receiver.  The greatest risk with teens using Snapchat is that they think they are sending anonymous photos that are untraceable only to find out the content can be used against them later in life.  If your children want to become something in life then you must warn them of the trouble Snapchat or any App can cause them long term.  It’s really not worth the long term effects.

Your Moms On the Go News Reporter 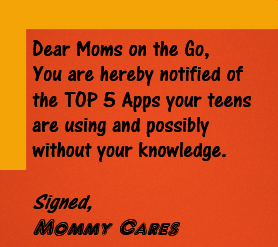 2 Replies to “Keeping up with your Teens”