“Some have asked WHY? Why am I a part of the ‪#‎NoGreyNoWay‬ movement?”

“Fifty Shades of Grey (FSOG) will be released this Friday and I was one of the many uninformed…until now.”

“The film is depicted in the trailers as an enticing, romantic and exciting love story…just enough images and thoughts to pose a final question: CURIOUS?”

“The campaign is working beautifully in stoking the curiosity of multitudes. I myself was at least curious as to what all the hype is about…so I did a little research.”

The upcoming release 50 shades…is actually based on the first of a written trilogy which has so far sold more copies than any other book EVER except the Bible. Although the main character in the book has a “back story,” and some claim there is a redeeming quality somewhere in the end of the series, I will not read it, nor will I watch it onscreen and here is why. The stats of the adverse effects on women and relationships following consumption of this material forces me to make a choice and either protect my heart, mind and life from its poison, or swallow it and hope I am an exception. We do not always have the choice as to what images or verbal communications cross our paths on a daily basis as we walk through this world. We do, however, have the choice, once informed, to avoid purchasing a book or movie ticket and purposefully subjecting ourselves to its content. This storyline is filled with BDSM, lust, sexual perversion, manipulation, verbal and emotional abuse among other things. It is not a depiction of love. It is the demolition of innocence, and a concoction to further numb the collective conscience. It is “legalized lust.” The FSOG sex toys are now being displayed and sold in our local stores which most certainly continue to pose the question to our young people…CURIOUS? 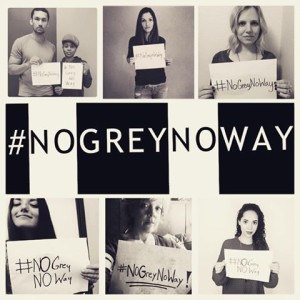 I am not trying to judge people nor shame them for their choices.

MOTG:  Some people say all judgment is wrong. There is one verse that’s normally singled out — “Judge not, that ye be not judged” (Matthew 7:1).  However, there are instances where the Bible says that we need to judge.  Correction is not judgment.  The Bible says that we should correct, rebuke, and be bold to those who are sinning.   Correction should always be done in an act of LOVE in hopes  they will believe.  If you keep your mouth close then you are responsible for suppressing the truth which could mean eternal death instead of eternal life for that person. “James 5:20 Let him know, that he which converteth the sinner from the error of his way shall save a soul from death, and shall hide a multitude of sins.”

“My hope and prayer in being a part of the #NoGreyNoWay movement is that CURIOSITY will cause people to delve a little deeper into the facts and stats associated with this story and its effects in order to make an informed choice BEFORE investing and ingesting.”

“As for me and my house… #NoGreyNoWay……” Debra Arnott

What do you think? We’d love to hear from you