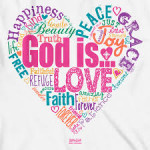 Many people all around the world have multiple opinions on God. We often here things like:

Did you know that Two people are not supposed to occupy the same space? (Pauli’s Exclusion Principle: The Origin and Validation of a Scientific Principle

When a mother carries a baby in her womb this breaks that theory completely in half.

The only reason this can logically happen is through the one and only True God. God developed the world. He spoke things into existence and they appeared.

We often here people say things about “the universe”

God is the creator of the universe. God ordained all things in the Universe. It’s OK to give credit and thanks to God.

There is only one true God and he is made up of 3 entities: the father, the Son (Jesus Christ), and the holy spirit.

If you look back at history you will see that the foundation of this world was built on Christian values. Almost every major political decision from the powers that be were based on biblical principles.

More to come on historical truths that cannot be denied.

Article was inspired by a friend who recently had a baby and we were discussing the miracles of life and she mentioned the fact that “no two people are supposed to occupy the same space.”  Hence, this article was birthed.

What are your thoughts on my article? We would love to hear from you.